Once upon a time – in fact once upon a very specific time – 11th October 1971 – Father Austin Smith and I climbed the stairs of 7 Ducie Street to the first floor flat – designed for a single occupant: consisting of bathroom –small bedroom –living room into a tiny kitchenette with space just for sink, cooker and fridge.

Two in a space designed for one – with the immediate question – who sleeps where? Though good friends, we needed some minimum separation to remain sane and civil! So, who takes the bedroom? Generously, Austin insisted I make it mine. In consequence his bed was in the shared living room space. This meant Austin surrendered his privacy until I or any evening visitors – left and he could convert it back to bedroom. Such detail may seem trivial, but coming from our monastery settings with personal space, his decision was an early indication of Austin’s generous spirit – a generosity he would live out fully throughout his 40+ years till his death in a nearby care home. That day in October 1971 was the first of our Passionist Liverpool Inner City Mission.

I recall us standing together, “looking out” onto Ducie Street – a short street in inner-city Granby ‘Triangle’, referred to locally by its postal number as Liverpool 8. The media later made the neighbourhood better known by its ancient name of Toxteth when they arrived to report on a civil uprising, but that was some ten years down the road. Today, Ducie Street stands deserted and desolate – after demolition, only one side left standing.

Glancing up that day, a passer-by might have seen our two figures gazing out of the window. For us it was a seminal moment, vivid still fifty years on – marking a totally new beginning. The view from the window was completely ordinary – and yet somehow it seemed different to the views from monastery windows. Perhaps, like Alice in “Through the Looking Glass”, everything seemed ‘normal and ordinary’ but in some mysterious way, meant we were ‘seeing’ differently. At the time I doubt we could express this clearly: looking back, I see us stepping over a threshold of discovery into new and radically different experiences. We were moving from the ‘familiar’ into a fresh awareness of the ‘ordinary’ – it was the start of a journey that paradoxically would lead into new and yet ‘ordinary’ landscapes.

As the journey continued, we increasingly came to appreciate how this path frequently meant re-examining earlier certainties. It has been a journey of faith changing us and, encouraging us to ask different questions as we reached signposts and milestones that pointed us further forward. That October day was a first small step on an enduring life-long journey. Unlike Alice, gazing into her looking glass mirror, we were looking through inner-city windows where we would find discover a community that generously welcomed us and shared its history and insights, and dynamism and courage to enliven and urge us forward alongside.

But as well as looking outward through the window, we also needed to look ‘inwardly’ and deepen the faith that brought us to this new day. That first day in 1971 we awaited the arrival of friends we had invited to share this moment with us. Unsurprisingly they were not visitors from Ducie Street – we didn’t know then the names of even our nearest neighbours. Instead, five friends from our Passionist community came to share our thanksgiving for this new start. They represented our community that had agreed Austin and I to leave our monastery and come to Liverpool.

Not everyone in our Passionist Province community were convinced of the wisdom of our move. We faced a continuing struggle in the years that followed to interpret and translate inner-city experiences within the context of traditional ministry perspectives. But, after much initial discussion, Father Hubert Condron our Provincial Leader, succeeded in persuading doubters to suspend hesitation and approve the move. Some saw it as a temporary experiment. Others remained convinced it would be doomed from the start! The support of both Province and Church in Liverpool was and is crucial. We did not see ourselves as two individuals – however enthusiastic – testing a pastoral project –doing our ‘own thing’. Rather we hoped we were part of a significant Passionist institutional shift and perhaps even for other wider Church communities. That said, we knew change is not simple and it would be necessary to face suspicions and misinterpretations. This remained down the years – perhaps still to some extent today.

However, on 11th October 1971 five Passionist friends arrived to celebrate with us in Ducie Street. The limited space in the flat was suddenly totally over-crowded! It was almost comic for seven men, unused to celebrating Eucharist in such a confined setting – negotiating space to put on their Mass vestments! Perched around a coffee table serving as an altar – some of us sitting on the side of Austin’s bed –we began this first Inner-City Eucharist.

I remember the moment with affection and gratitude – it was an intimate and warm celebration. Austin had selected Scripture readings and prayers reflecting the occasion. We shared personal thoughts and prayers. Positive overall, there was however, a moment for me that ‘jarred’ a little. One friend voiced his prayer: “We thank you, Almighty God for this new Passionist beginning and ask that you guide Austin and Nicholas so they can bring your message of love and truth to this neglected neighbourhood”.

The prayer was very sincerely meant, but did the words express a theology that presumes priests hold privileged positions, vis a vis God and the community they serve? Perhaps confusedly, I hoped and anticipated it would be Austin and I needing to discover the presence of God already active in this community. Then, as now, I suspected it would be the two of us needing God’s help in discovering God’s Spirit alive in the Liverpool 8 community. And such it has proved to be!

Today, I rejoice in our journey begun that day as we reflected both ‘outwardly’ and ‘inwardly’. Today I still miss Austin, Passionist friend and companion. His death ten years ago in a care home he helped design, means today we celebrate our Jubilee differently! Sad though I am at his painful loss, I joyfully rejoice with friends who continue to enrich me along the way.
A poem by William Stafford perhaps goes some way to expressing for me our anniversary connection linking 11th October 1971 and October 2021.

The Way It Is

There’s a thread you follow. It goes among
things that change. But it doesn’t change.
People wonder about what you are pursuing.
You have to explain about the thread.
But it is hard for others to see.
While you hold it you can’t get lost.
Tragedies happen; people get hurt
or die; and you suffer and get old.
Nothing you do can stop time’s unfolding.
You don’t ever let go of the thread.

In 1971 we did not have a prior worked-out action plan. Were we foolhardy? Or perhaps was this the most appropriate preparation – arriving without predetermined perspectives. With hindsight, an unplanned beginning meant we had to begin learning in situ. Given the heaviness of traditions in our virtual pastoral ‘back-packs’ perhaps the first task was to start “unpacking” – shedding unnecessary baggage that theological conditioning had pre-loaded! But practically, what should we do that first day?
Visitors had departed, we looked at one another and wondered next – we opted to go to the cinema!

Then the current blockbuster was – “Ryan’s Daughter” – a story of an Irish community struggling for independence. In 1971 “The Troubles” were building in intensity. Perhaps there was some strange providence in us choosing a film about community struggle and violence? Liverpool 8 is very different as a community, historically and culturally compared with Ireland’s early twentieth century experience. But Austin and I would soon begin to glimpse the enduring long struggle in Liverpool 8 of people seeking their freedom and human dignity – in the face of historical racial and economic violence. It is Liverpool’s Black Community that has helped teach and encourage us so that we too try to play our small part in the ongoing struggle. Along the way, we would come to appreciate how such situations – sites of suffering – are privileged places in which to rediscover the face of God’s love and mercy – as on Calvary– close alongside when injustice and violence is confronted.

At the end of that first day, we both had sensed something new and momentous beginning. 11th October 1971 counts as a very significant day for us. As we wished each other good night for the first time, we went to bed with a sense of quiet satisfaction – though nervous anticipating what the future might bring.

On Sunday last, 3rd October 2021 I was very privileged to be invited to be part in a sacred ceremony – with prayers and music mostly in Urdu. It was a Memorial Celebration in the Liverpool 8 Pakistani Community as family and friends gathered to mourn the life of a great man – Mr Mohammed Anwar. Mohammed came to our neighbourhood in 1973. We became good friends. Like Austin, he proved himself an outstanding community leader – someone both secure in his personal faith and cultural identity and at the same time a bridge-builder, between all sections of our neighbourhood – overcoming artificial barriers. He and Austin particularly became close friends as they shared community initiatives.

I was honoured to be invited to speak during at this community assembly. I was present on my own behalf, but also felt I could recall Austin’s respect and friendship for Mr Anwar. Another key leader in our community is the Black elder Maria O’Reilly. Sadly, last Sunday Maria was in hospital suffering from Covid. Disappointed to be unable to attend herself and represent the Black Community’s appreciation of Mohammed, she emailed me: “Nick, please will you do me a favour and read my written tribute for Mr Anwar at his Memorial?”. I felt commissioned to speak of God in the context of this Muslim sacred setting – and in the sacredness of Liverpool 8. I felt completely at home! This celebration was a very different but paradoxically very similar “Eucharist” of thanksgiving as that we shared in Ducie Street fifty years earlier.

9th October is a day when the Catholic Church celebrates the memory of John Henry Newman. He met a Passionist Dominic Barberi – and that was the start of his new development new journey. Today, we see so many friends identify8ng as Passionists, women and men, likewise beginning and continuing new journeys – keeping hold of the ‘thread’ that links us on our Kingdom roads. For me, this provides the only context in which the journey begun by Austin and me fifty years ago continues to find its authentic expressions. We journey into the God calling us to rediscover Him present in the wonderful complex messiness of life. As Austin was frequently heard to mutter: “For God’s sake, simply learn to be human!”

The Gospel for Mass this weekend, promises a hundred-fold when we listen for a voice calling, and when we follow the footsteps leading to rediscovery of the Kingdom. Happy Jubilee celebrations to all fellow Passionists – women and men – may we continue to help one another as we travel forward together!

“We shall not cease from exploration
And the end of all our exploring
Will be to arrive where we started
And know the place for the first time.” 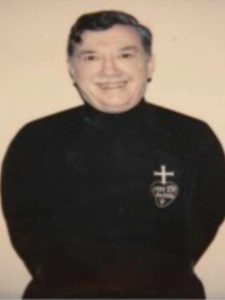