BIOGRAPHY OF THE STS. JOHN AND PAUL

After a successful career of soldiering, Constantine the Great entrusted Saints John and Paul with the protection of his daughter, Constantia.

Upon the death of Constantine in 337 and his bequeathal of a formidable inheritance, Saints John and Paul retired to private life, built a house on the Caelian Hill, led exemplary Christian lives of charity and prayer, and prospered under the reign of Constantine II.

In A.D. 361, Julian the Apostate ascended to the imperial throne. From his youth, Julian had exhibited strong pagan tendencies, and during his reign, he reestablished many pagan practices, persecuted the Church, and challenged the authority of bishops throughout the empire.

In the summer of 362, he called Saints John and Paul back to military service in his court. Their acquiescence to Julian’s request would have meant a denial of their Catholic faith, since court officials were required to offer incense to false pagan gods.

Saints John and Paul recoiled at the thought of apostasy. Their refusal enraged Julian who accused them of impiety, a capital crime. Certain that Julian would order their deaths, Saints John and Paul charitably dispersed their earthly possessions to the poor of Rome. 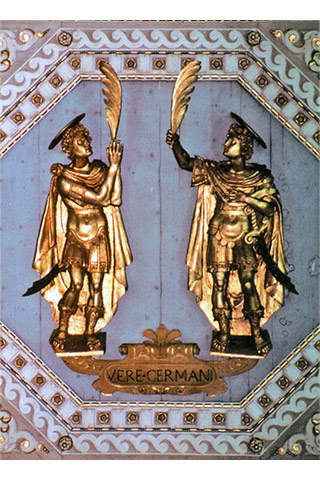 Julian sought to murder them, but he feared public outcry, for the Saints were extremely popular. Thus, the Emperor dispatched Terentianus, an officer of his court, with a murderous objective to their home. When he entered, he found Saints John and Paul at prayer.

When they rejected Terentianus’ order to offer sacrifice to Jupiter, he ordered them, on Julian’s prior instruction, beheaded on the night of June 26, 362 in their own home. Then Terentianus buried their bodies in the house and spread the rumor that Julian had sent Saints John and Paul into exile.

It did not take long for the truth to be known. A certain person, praying in the house, was granted a vision, wherein he saw, and loudly proclaimed, the details of the heinous crime.

Many were converted thereafter, including Terentianus himself. One year later to the day of the martyrdom of Saints John and Paul, on June 26, 363, Julian the Apostate, was felled by an arrow while campaigning in Mesopotamia. He died with the words “Vicisit Galilaee” (“Thou hast conquered, Galilean”). 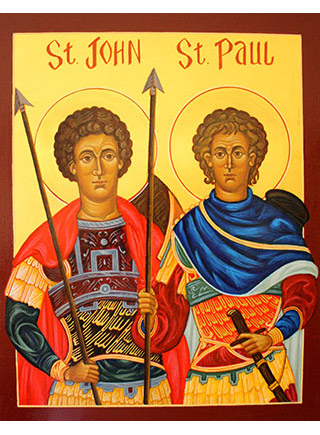