The fourth meeting of the historical Commission at 9:00 AM on Friday 27 October 2017, at the retreat in Bilbao in Spain. The meeting took place after the history course that Frs. Alessandro Ciciliani, Robert Carbonneau and Andrés San Martín had conducted in Daimiel (Spain) to seven novices of the SCOR province. At the meeting all the members were present, including Fr. Pablo Gonzalo.

Concerning the articles for the PIB, Fr. Alessandro said that for next year and article can published regarding the 150th anniversary of the birth of the blessed Pio Campidelli.

Fr. Pablo intervened in regard to the processing of our sources in the General Archives, guidelines and criteria for the use of the Archive with the action steps. A list could be sent that could serve as the basis for dealing with our sources. He could submit this in February because it is a work he is doing for the University and that can also be useful for the Congregation.

Fr. Alessandro explained better the point concerning collaboration with the General Archivist for the projects of restoring and scanning the ancient collection from our archive. For next year a project was presented and obtained very good response, that is €13,000.

He reassured the members that the General Archivist takes excellent care of the documents and does not allow any to be lost or be removed from the General Archives. The main problem is to get money to fund various activities of the Archives.

Fr. Robert stated that early next year will leave California to return to his home province of Saint Paul of the Cross near New York. He has always been considered the Province Archivist, and he will resume the work organizing the archives of the United States in our religious houses, also involving experts and students.

Research in Passionist History and Spirituality

Fr. Alessandro presented to the members two research projects, that of Fr. Maurizio Buioni and Sr. Antonella Medoro CP, as possible publications. In addition, his work that consisted of an expanded version of a report concerning the Canonization of Saint Paul of the Cross that due to both its excessive length and two articles about the topic already published in the Passionist International Bulletin (BIP).

Other works are the canonization of the Founder, the presentations of the Historical Commission at the course for formation personnel, and finally that of Fr. Andrés about the community of “Rancito” in Mexico. There was also a project regarding the methodology used in historical research and the proper use of sources that Fr. Pablo will prepare. Fr. Pablo added that the work was almost completed and that he only needed to review some aspects.

Translations of the Passionist History and Spirituality booklets

Regarding the translation of booklets of the series in Passionist History and Spirituality, like last year, the situation is a bit complicated: the Passionist nuns in Indonesia have various commitments and have little time available for this project; however, they can do something. On the contrary, the Passionist Sisters cannot do anything.

Among all the monasteries of nuns, there are only two that can do translations into Indonesian- Ovada and Campagnano. Currently, five booklets, Nos. 2, 5, 9, 15 and 19 have been translated.

Presentation at the General Chapter and the history course

As was the case for the General Synod, Fr. Alessandro delivered his report so that everyone could offer comments and suggestions. He was considering doing the same thing for the General Chapter. Since his report needs to be translated, it must be completed by August or early September.

Fr. Alessandro suggested to those who already had a chance to write something and start the work, a synthesis-summary or a reworking of the history already written. In fact, there are volumes already published about our history from 1720 to 1863. It is good therefore that we try to start writing a little bit every month so that we are not under pressure at the last moment.

Translation of the sources concerning St. Paul of the Cross

Fr. Alessandro asked Fr. Pablo to give the Commission an update on the translation of the historical sources concerning St. Paul of the Cross, such as the first biography written by Saint Vincent Strambi from Italian into Spanish.

Fr. Pablo responded that the SCOR province is study ways of celebrating the third centenary of the founding of the Congregation. The material has already been entrusted to various religious and a budget for Spanish translations has been prepared. For this anniversary, the province will publish these historical sources on St. Paul of the Cross in Spanish– the first biography written by Saint Vincent Strambi, probably by next June. Three students in Salamanca– two from Italian into Spanish and one is an expert in old Italian philology are translating it.

They are also working on the translation of the letters of Saint Paul of the Cross: the four volumes published by Fr. Amedeo Casetti in order to complete the missing sources in Spanish. The estimate has already been prepared. Hopefully these translations will be ready by the time of the tercentenary.

Fr. Alessandro introduced the question of the library of the historical Commission. He began to catalog the books digitally, and then he stopped because he did not have enough time. Therefore, he asked about the possibility of having an intern for next year, probably for a couple of months, to catalog the books of the Commission digitally as well as other books.

The approval of the next budget with these changes will occur during the General Council Consulta at the end of January 2018. 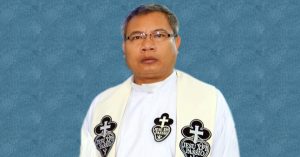