Resignation and appointment of the Bishop of Sanggau (Indonesia)

Resignation and appointment of the Bishop of Sanggau (Indonesia)

The Holy Father accepted the resignation from the pastoral administration of the Diocese of Sanggau (Indonesia), presented by Bishop Giulio Mencuccini, C.P..

The Holy Father has appointed as Bishop of the same Diocese the Rev. Fr. Valentinus Saeng, C.P., until now Director of the Passionist Spiritual Center in Malang.

Bishop Valentinus Saeng, C.P., was born on 28 October 1969 in Keramuk, Diocese of Sanggau. He attended the St. Gabriel Passionist Minor Seminary in Sekadau. He entered the Congregation of the Passion of Jesus Christ (Passionists) in 1989 and studied philosophy and theology at the inter-diocesan Major Seminary of Malang, Java. He professed Perpetual Vows on August 22, 1996. He was ordained a priest on 26 September 1998.

About the Author: Javier 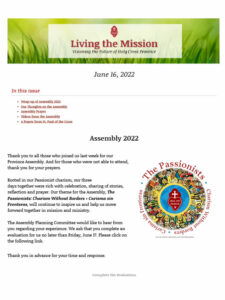